Challenges for Female Members of Parliament in Tanzania

Women’s participation in parliaments is crucial to improving the representative nature, accountability and quality of democracies. It can have a profound impact on the way politics is practiced, both in how politicians relate to each other and the issues and policies that are given priority and addressed within parliaments.

Global Partners Governance worked with six MPs in Tanzania, four male and two female, to help them improve their constituency work. A number of these MPs have particular concerns about the impact of students’ long journeys to school, for many the length of a journey places them at serious risk of attacks including rape. Solutions such as the provision of school dormitories are currently being developed. One of the female MPs has gone further and has been brave enough to campaign on an issue that is not spoken of publicly, the provision of sanitary towels for girls. Many girls do not have access to sanitary protection and thus miss school for several days every month. Her campaign gained the support of other MPs including a prominent male MP.

During the 1980s Tanzania was one of the first countries in Africa to introduce quotas for women in its parliament, currently 145 out of 390 MPs are female, (37.2%) with the Tanzanian parliament being ranked at 23rd in the world at the time of writing. But despite having a quota system for decades the vast majority of the female MPs continue to be appointed to the reserved seats, with little change to the bias against women as candidates in constituencies.

The majority of members (264) are directly elected from constituencies through the first past the post system. In addition, up to 10 members can be appointed by the President and 5 are elected from within the Zanzibar House of Representatives. The comparatively high number of female MPs has been achieved primarily through the use of reserved seats, known as special seats, to which 113 women are appointed.

This is one of three common ways electoral systems overcome societal bias against women being elected. The other two are legal candidate quotas and voluntary party quotas. Legal candidate quotas are most often used in proportional representation systems with parties having to meet a legally defined minimum percentage of candidates of one or both genders. Voluntary party quotas are decisions taken by individual parties to ensure a certain percentage of female candidates.

Quotas have been shown to be essential to improve female representation in parliaments around the world. However, every system brings with it issues and sometimes unintended consequences.  In Tanzania the special seats are regional, covering several of the constituency seats and are allocated by political parties to women, based on the proportion of the vote that the party has received. An unintended consequence has been that it is hard for women to contest constituency seats as they are deemed already to have a place.

Many female MPs in Tanzania holding special seats want to move to be constituency MPs, but they face great challenges. Not only do they have a much larger area to cover than a constituency MP, but they are not entitled to the same support for their work in the region. Managing the relationships with constituency MPs can also be a significant challenge.

Challenging for a constituency seat

With special seat MPs covering large areas it can be difficult to build up the support required to run for a constituency. Becoming a candidate necessarily means either challenging a sitting MP from another party or challenging a sitting MP in an internal party selection primary. Neither is easy. Only if political parties were willing to allow all women primaries for constituency seats where the sitting male MP was voluntary leaving parliament would there be a process guaranteeing an increase of female constituency members. This would be akin to the process used in the UK Labour Party, where a proportion of seats have to choose candidates from all women shortlists. Such a change would take time and commitment of party activists and leaders.

Being appointed by political parties, many of the women who become MPs through the special seat system lack the political experience that is gained in campaigning as a candidate for a constituency. This can make it difficult for them to contribute fully within parliament. Supported by the Tanzanian parliament and the IPU and UN Women, the Tanzanian Women’s Parliamentary Group has been developing a mentoring programme. The aim of the programme is to focus on assisting women to gain the political knowledge and skills they need to be effective. Mentors can be either male or female MPs and former MPs. The hope is that not only will this support female MPs to become more effective, but also to better understand political processes. It could also help them start to build support to challenge to be a candidate for a constituency.

Meg worked on the Global Partners Governance project in Tanzania, and has worked with the Inter-Parliamentary Union (IPU) on its support to the Tanzanian Women’s Parliamentary Group. 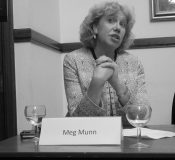