Batool Al-Refaai is a Senior Project Manager at GPG currently based in our Jordan office and working on the Iraq project. In this post, Batool discusses the challenges women face when trying to access leadership positions and the work GPG has done to support elected women’s network in Jerash, Jordan.

“Women feel extra pressure to prove themselves in male-dominated areas and need to work twice as hard as men to prove themselves.” The single most common phrase I’ve heard while working with women in leadership positions, whether in Jordan or Lebanon. The reason for this, as I see it, is that sociocultural factors direct women away from positions of power and decision-making, all the way since childhood. As a female who was born and raised in Jordan, I was raised to be a wife and a mother and was expected to look after my family but wasn’t raised or expected to be in leadership positions, and many women in my society were raised in the same way. Some values, traditions, and habits encourage women to have access to basic education and basic jobs, while leaving positions of power to men as culturally they are considered more capable than women.

As a result, women will not be encouraged to obtain new skills or improve their abilities, with limited networks and opportunities (and many other challenges) they might face discrimination for being women, sexual harassment, or won’t be taken seriously by some men and women in their societies. Eventually, this will lead to their withdrawal from participating in political life and decision-making processes. The absence of women from political life and leadership positions means many issues related to their communities will remain unaddressed. Women’s participation in politics will bring to the table issues that are not discussed when it is primarily men that are in those high-level positions.

Empowering women to be in leadership positions will help other women look differently at their own role and abilities. Creating role models not only will encourage other women to trust themselves more in leadership positions but it will also raise awareness on issues related to women and their communities, and help in highlighting the challenges facing other women in reaching to leadership positions and come up with solutions to overcome these challenges. Empowered women empower women and eventually entire generations. Economic empowerment is central to women’s ability to overcome poverty and improve their well-being. It will create more resilient women who are able to provide for themselves and their families. Economic empowerment will lead to more opportunities for women to have a control over their own minds, lives and bodies; and make their voices heard, increase their meaningful participation in decision-making in their households, government, public spaces and international institutions.

I’ve worked with GPG since 2017 to empower and strengthen the practical political skills of women in many countries, including Lebanon and Jordan. In Jordan, we provided support to the elected women’s network by sharing practices in the UK, other parliaments in the world and local councils internationally as examples, but adapting it to suit the Jordanian context. There have been challenges in helping the members to understand how the fact-finding process will work, but the support from GPG has demonstrated the value of the approach, both in identifying barriers to economic empowerment of women and in suggesting means of removing them. GPG supported the elected women’s network of Jerash to hold their consultative evidence sessions with women who run businesses, women from rural areas, the executive council of the governorate and CSOs to gather their views and transform these into specific policy recommendations to support economic empowerment for women in Jerash.

I feel privileged to have had the opportunity to work with the elected women’s network in Jordan in enabling change, connecting citizens with their representatives and to help the network in delivering some tangible solutions to address citizen’s needs. Although there is still a need to work towards change; further steps in awareness raising, building the capacity of women to continue to push for themselves, and work with communities to accept and support women being active in politics, there has been a lot of progress in Jordan.  I feel that a lot of Jordanian women have recently emerged as leaders and proved that they should not be taken lightly in policy making process, and I look forward to continue working with GPG on their distinctive approach to strengthen women in Jordan and the wider region. 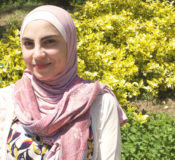