This week’s blog comes from GPG’s Head of Programmes Zafran Iqbal, who provides us with an insightful overview of the multi-factorial drivers of youth discontent in Iraq, and highlights areas of focus to address young people’s grievances.

In October 2020, Global Partners Governance (GPG) launched a groundbreaking and extensive research report on ‘The Economic Drivers of Political Discontent among Young Iraqis’. This research highlights many key findings which will be familiar to those working throughout the Gulf and the wider MENA-Region: a population demographic with a very high proportion of young people, young people who are expecting and demanding more from their governments and states institutions; whose sincere desire to play a meaningful role in the rebuilding of their countries’ economies and societies, is informing their interactions with politics and the State at all levels. It is crucial for organisations working in these contexts to understand the drivers for the behaviour of young people and their vision for the future of their countries. In this piece, GPG are delighted to present the findings of their research.

It has been a year since young women and men of Iraq took to the streets in October 2019 to protest decades long sectarian politics, corruption, lack of public services and unemployment. The October 2019 protests marked the beginning of a process that led to the resignation of Prime Minister Adel Abdul-Mahdi and his Government, leaving Iraq with a caretaker Government for nearly six months until May 2020. During this time, Iraq faced a wave of daunting challenges including rising US-Iran tensions, crashing oil prices, and, not least, the COVID-19 pandemic.

On the first anniversary of the protests, Global Partners Governance (GPG) launched the findings of a significant piece of research examining how these events continue to reverberate amongst young Iraqis today.

Iraq’s economy has been battered by years of wars, sanctions, fluctuating oil prices, and a profusion of insurgencies. In the absence of a strong institutional framework, large parts of the Iraqi economy were opened to global market forces, pushing whole segments of the country’s population into poverty while ingraining corruption as a part of politics and business. The strong oil prices and a relatively peaceful environment of the late 2000s granted Iraq a brief period of economic recovery. That period came to a close in the mid-2010s as the country was hit by a war with ISIS, civil unrest, and further fluctuations in oil prices.

Corruption, in particular, has been the theme that has tied together mass demonstrations since 2010, According to the 2018 public opinion poll conducted by the National Democratic Institute (NDI), 82 percent of Iraqis were “concerned” or “very concerned’ about corruption at the highest levels of government and 83 percent believed that corruption was getting worse.

Iraq also has one of the youngest populations in the world. 60 percent of Iraqis are below the age of 25, meaning that they barely remember a time before the 2003 US-led invasion of their country. It is this group who are affected most severely by the dire condition of Iraq’s economy, with very low educational levels, lack of employment, and uncertain futures scarred by decades of conflict and corruption. 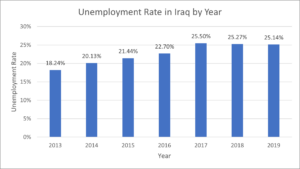 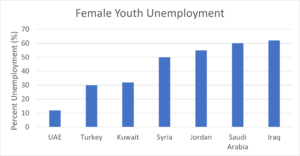 It is against this economic backdrop and growing youth frustration that Global Partners Governance commissioned its research entitled “The Economic Drivers of Youth Political Discontent in Iraq.” Our researchers conducted in-depth interviews with 65 young people between 18 and 30 years of age in Baghdad, Basra and Thi-Qar, the regions that saw the most intense protests, as well as the Kurdistan Region. Our findings clearly illustrate the overall marginalisation of youth in the country and capture new trends of inclusive nationalism that are emerging in the country’s contested and divided political space.

The research shows that unemployment, corruption and poverty are the biggest concerns for young people in Iraq. A majority of the respondents do not trust the political system on provincial, regional and federal levels. Overall, young Iraqis do not identify with, or feel committed to the current political structures, and political parties receive the biggest share of youth criticism. Young people see the existing governmental institutions to have been captured by political parties, who are thought to be serving their own interests rather than those of the public.

Iraqi youth are clearly demanding a strong, autonomous state that allows for an inclusive Iraqi identity and a more just distribution of the country’s wealth. A majority of respondents in Baghdad, Basra and Thi-Qar supported a strong presidential system against the divided parliament, and a direct election of governors against the provincial councils, which they argued were acting according to sectarian and party loyalties. Respondents were also highly critical of patronage networks in the Kurdistan Region. Frustrated by the region’s economic problems and corruption, they laid the blame on the two major political parties of the Kurdistan Regional Government (KRG).

Throughout the research, we saw that both in the Kurdistan region, as well as in the rest of Iraq, there is a growing youth reaction against party-led nationalism and sectarianism respectively. As seen in the demands of October protestors, young people are calling for a new national identity, one that breaks with the sectarianism and patronage networks of the ruling elites, and sets in its place a new social contract that will honour “Iraqis first” of the popular slogan.  This anti-sectarian sentiment in Iraq draws parallels with the growing alienation of young people from party-defined nationalism in the Kurdistan region. Kurdish youth are less and less interested in the Kurdish nationalism promoted by the region’s two dominant parties and identify with a new form of nationalism that combines liberal conceptions of social well-being and government-citizen relationship with a surge of pan-Kurdish patriotism. These two parallel trends in the Kurdistan region and the rest of Iraq present opportunities for better dialogue among the youth of Iraq, and are likely to determine the politics of the country in the coming years.

Young people in Iraq reject the patronage system that intersects divisive identity politics. They call for the expansion of the private sector and more government involvement in the creation of jobs, loans and training to support entrepreneurial activities. They demand a strong state, one that is autonomous from the political parties and their sectarian patrons inside and outside Iraq. This is a state that works for its people, promotes social justice and an egalitarian country.

The potential of young Iraqis to improve Iraq’s economy can no longer be ignored. The research highlighted four key areas for Iraq and the international community to consider. These include i) improving skills and training, ii) providing better economic opportunities, iii) removing legislative and regulatory framework, and iv) creating genuine political participation.

The importance of developing youth entrepreneurship policies in Iraq is evident. In recent years, especially in the Kurdistan region, online businesses have grown in the service sector. Most of these businesses are small enterprises, providing services in digital media strategy and planning, social media management, online advertising, wedding and event planning.  These are positive developments that need to be supported and expanded across Iraq through skills training, funding programmes, entrepreneurship networks and regulatory and legislative changes.

The recent COVID-19 lockdown has created a further push for online businesses in the Kurdistan region. Despite the absence of a credit card system and a loan mechanism, online start-ups have begun running in food delivery, clothing, bakery and childcare services.  Conditions are thus favourable for organising virtual training to young Iraqis in fields such as project management, start-ups, accounting, soft-ware, web designing, fundraising, technology development and communication. Foreign businesses operating in Iraq should also incorporate internship, graduate training, coaching and mentoring programmes into their company policies.

As our research has shown, there is a high demand among the youth for inter-ethnic, inter-sectarian and inter-regional interaction.  Thus, creation of such dialogue mechanisms through which young people can discuss and debate among each other on social, political and economic issues is critical in regaining young people’s trust in political processes. 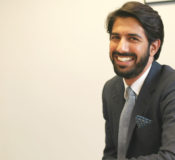 This week's blog was written by GPG's Head of Programmes, Zafran Iqbal .