In Defence of Political Parties

Stephen Gethins is a GPG Associate. He is a former Member of Parliament having served as MP for North East Fife from 2015-2019 . This blog is an ode to political parties. It shows how they benefit from being grounded locally and the reciprocal significant value they have in tackling local concerns.

I attended my first political party meeting at a local sports centre in Perth, Scotland, the town I grew up in back in 1993 when I was 17 years old. Like most politically interested young people I turned up expecting discussion about world affairs and grand politics. Great debates about the affairs of the day.

As anyone who has ever attended a local political meeting will know, I was to be disappointed. The meeting was dominated by proposed council road closures, bin collections and an argument between some of the members for the latest fundraiser, a jumble sale, due to take place the following weekend.

I had gone into the meeting somewhat anonymously and sat at the back. When it came to the end I was preparing to leave when one of the office bearers asked me to say hello to everyone and have a cup of tea. I never looked back.

In retrospect I was wrong about what to expect from that meeting in Perth. Political parties are at their best when grounded locally and should be focused on local issues. Ask any Member of Parliament and their inboxes are filled overwhelmingly with local issues such as waste collection, health service provision and the quality of education. These are the issues that people care about and top the agenda for all politicians and the bulk of an MP’s work.

I remember in 2015 I became my Party’s first ever representative on the Foreign Affairs Committee. In the autumn of that year we considered the question of whether to back military action against Daesh in Syria. It was a big and important question with profound consequences whatever way we chose to vote. On the day of the vote I was briefing colleagues having weighed up the arguments and considering the best course of action. Yet on the day of the vote most phone calls and emails I received were over the local authority’s plan to close the small community library in Pittenweem, a village in my constituency.

The lesson is this, no matter the issue all politics is local. That is credited to former House Speaker Tip O’Neil but actually all politicians know this to be the case. The biggest driver of foreign policy remains domestic policy. Local issues matter to people and whilst we must all take our responsibilities seriously over the macro issues as responsible global citizens for a party to be successful it must be grounded locally.

During my time in Parliament I was lucky to be supported by a fantastic local party. Members and office bearers, all unpaid volunteers, were there to keep me abreast of local issues. In every single one of the 100 communities in my constituency I could draw upon local insights and expertise. There were members from across the breadth of society teachers, doctors and shop owners as well as all ages and experiences who gave me a helpful perspective. That was an incredibly helpful resource.

The SNP, the party of which I am a member, has approximately 120,000 members in Scotland. The party relies on its members to campaign and fundraise as well as advise and act in their communities best interests.

The local party organisation also have other roles and can be influential. The moment I walked into the room in Perth I was able to be involved in my local party’s organisation and activities. Volunteer, learn and make lifelong friends. It also provided me with a support network and a source of guidance and advice when I later ran for election. Critically it didn’t matter who my parents were or how wealthy I was, I was given the same opportunities as anyone else.

If they have the right set up parties can act locally to help anyone join and get involved in politics. When it comes to underrepresented groups that can also help. The youth wing helps bring young people together to discuss and debate policy and campaign. Other groups such as the women’s networks or Scots Asians bring other under-represented groups together that provide support and where needed targeted training. The SNP, like other parties, is also trying to increase the number of women and from other under-represented groups through short-listing in parliamentary contests.

This is not exclusive to the SNP and I have friends from across the political spectrum who have benefitted from the party organisation that has helped them fulfil their potential. At their best political parties can act as vehicles for equality and social mobility. That means being open as well as accountable and like any organisation having enforceable rules in place to make sure of equality.

I know political parties often get things wrong and none are perfect, my own included. Too often we see that political parties lose their links with their local communities, they can let people down and no party is immune to that danger of becoming out of touch. The events in Lebanon in recent weeks were devastating and heart-breaking. For many of its citizens politics and political parties had let the people they were supposed to represent down. Political parties can go off the tracks forget about the electorate and that the ‘boss’ is the population, their constituents.

Politics is about people not dogma. It is about the local communities it serves and the end point should be a better and fairer society for everyone. We may disagree on how to get there but that is the point of politics we discuss and debate how to make the society in which we have a common stake is improved. Democracy makes that better.

Crucially politics must be grounded locally. That is where political parties come into play. I do not agree with the first past the post system in the UK. It is unrepresentative and leaves too many wasted votes. However, one benefit is that it ensures a link between the politician and the community that individual serves. It is worth highlighting that can be done with the right proportional system such as those in Ireland or the Scottish Parliament among others.

The point is this, political parties can be a force for good. They can provide the support networks that help talented people of all ages and backgrounds on their way to political office. That is particularly important when the party has a strong grassroots membership who are involved in the decision–making process and the day to day running of the local organisation.

Local volunteers are the life-blood and front face of political parties. It is the volunteers who chap doors and come face to face with the voters along with elected members. They don’t receive payment and give up their free time because they want to make the world a better place. That is a credit to volunteers of all parties, they make our democracy real and all politicians owe them a debt of gratitude.

They also play another role which is to ensure that there is a strong connection with the local community. A way of making sure that all politics is local and not something that happens in capital cities that can often seem distant.

I am grateful for the support that I have received over the years from my political party after I stepped out on those first tentative steps in a room in a sports centre in Perth. It helped me make progress as an interested 17-year-old. Since then local parties have helped others get a start and given them support. That has ranged from childcare, distributing newsletter and fundraisers for campaigns. That is an important method of social mobility and helps keep politicians grounded and in touch at a local level.

So, my defence of political parties? They are one part of the solution and the rest is up to us. 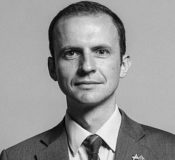