On the occasion of her collaboration with GPG on the creation of an online course for the Uzbek parliament, GPG’s Associate and Former Deputy Chief of Staff to the Deputy Prime Minister Baroness Alison Suttie recalls her memories of working in Uzbekistan, and voices her hopes to soon resume in-person collaboration.

Beginning a new project in the middle of a global pandemic presents certain challenges but this new project  – GPGF’s first project in Uzbekistan – is a particularly interesting one that comes at a fascinating time in the Central Asian country’s development.

The project is to help the Uzbek parliament in its aim to create a new human rights committee which will oversee the country’s implementation of its international human rights commitments. The project will also help to promote gender equality as well as to develop our relations with Uzbek civil society.

Following the beginning of the covid-19 pandemic, Global Partners have been able to adapt their working methods and since the late summer, with a team of extremely experienced colleagues, we have been developing a tailor-made online learning platform for the colleagues in the Oliy Majlis – the Uzbek bicameral parliament in Tashkent – to help them develop their new committee.

Uzbekistan is a fascinating and beautiful country which is developing and transforming at a remarkable pace.

I first visited Tashkent and Samarkand exactly three years ago in November 2017. I was immediately struck by the clean and modern streets of Tashkent with its large parks and broad avenues. The city had been almost entirely destroyed by the 1966 earthquake and was rebuilt as a model Soviet city, including the construction of a rather beautiful and efficient Soviet metro system. Nowadays the development of the Tashkent City project is designed to give the Uzbek capital a 21st century feel with its high rise buildings, shopping malls, as well as its many business and cultural centres.

A republic of the Soviet Union for over 60 years, Uzbekistan gained its independence with the collapse of the Soviet Union in 1991. With a population of over 30 million Uzbekistan has the largest population of the “Stans” and its legendary Silk Road cities of Samarkand, Bukhara and Khiva make it an increasingly popular tourist destination (at least until the Covid 19 pandemic struck earlier this year).

In November 2017 I had been invited by the Uzbek government to attend the Samarkand International Conference on Security and Development. Over 500 participants were invited to attend a two-day conference in the beautiful city of Samarkand.

After spending two days in Tashkent holding a series of meetings with parliamentarians in the Oliy Majlis, including a meeting with the well–known Uzbek academic and politician Professor Akmal Saidov, I set off with the rest of the UK delegation from Tashkent on the high–speed train to Samarkand.  It was hard not to be impressed by the sheer scale of the logistics involved in transporting several hundred people, including a great many VIPs, over 300km from one city to the other. It gave me a flavour of Uzbekistan’s organisational qualities – and was quite remarkable to witness.

When President Karimov died in 2016, he was replaced by  Shavkat Mirziyoyev who had previously served for many years as Prime Minister. Under Karimov, Uzbekistan had lived under a brutal authoritarian regime, but by the time I arrived in Uzbekistan three years ago, it was already clear that President Mirziyoyev had extensive plans to reform and modernise the country.

As I sat in the enormous Soviet style conference hall in Samarkand in November 2017, listening to President Mirziyoyev’s speech, it was clear that the new President’s ambitions for Uzbekistan were not just about economic reform but were also about reform of all aspects of Uzbek life, including political reform and improved respect for human rights.

In February this year, before the global pandemic restricted international travel, Global Partners were able to facilitate an inward visit to the UK by an Uzbek delegation, led by Professor Saidov, (who as well as being a senior politician is also the Director of the National Centre of the Republic of Uzbekistan for Human Rights) for them to see first-hand the work of the Joint Committee on Human Rights in Westminster.

In the months ahead I look forward to strengthening existing contacts with Professor Saidov and his colleagues in the Uzbek parliament as well to developing new ones. 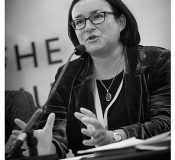 This week's blog was written for GPG by Former Deputy Chieff of Staff to the Deputy Prime Minister Baroness Alison Suttie.