Parliament in the New Egyptian Constitution

Following the events of 30 June, Egypt’s constitution has been suspended and a new draft is under consideration by the Constituent Assembly. On 10 September… Read more »

The Logframe and the Beautiful Game: Project logic v football logic. The first of GPG’s Politically Agile Programming papers. This short paper is based on a… Read more » 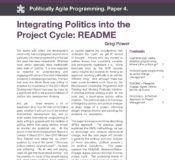