GPG started working in Iraq in 2008. Since then we have supported political leaders in Iraq’s parliament, ministries and sub-national government in Basra and Nineveh to strengthen the Iraqi political system, foster national reconciliation and improve the delivery of services to Iraqi citizens.

GPG’s work originally started within the parliament (Council of Representatives), working with successive Speakers to co-ordinate and manage parliamentary business, the development of policy in key areas such as budgeting, social security and health, and improve the quality of legislation. Over time, we provided support to parliamentary committees addressing corruption in key public service sectors such as the provision of water, and helped the parliament introduce its first code of ethics and public integrity.

The success of our work meant that it expanded to incorporate the relationship between parliament and government ministries in the development of policy and legislation, and in 2015 we began working with sub-national government to improve the implementation of national legislation and enhance coordination between Federal and Governorate authorities, in conflict-riven environments. Following the 2018 election we continue to work with parliamentary leaders on parliament-government relations, anti-corruption measures and reconstruction.

Connecting Parliament with the Public 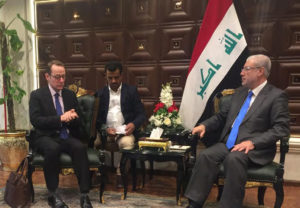 Since the May 2018 parliamentary elections, GPG has been working in partnership with the Iraq Foundation to provide support to develop better mechanisms for public engagement in the decision-making process. The election results revealed a public weary with the direction of Iraqi politics and seeking visible signs of a new approach and a more inclusive and responsive form of policy-making. The project has been designed to target four main areas:

The work builds on GPG’s previous support for the Council of Representatives over many years, which has built the resilience and responsiveness of the committee system within the parliament as well as supporting key leaders (the Speaker, Deputy Speakers and senior staff) to achieve their objectives for reform.

The issues of decentralisation and governorates’ relationships with Baghdad are a political priority for a stable Iraq. GPG’s work on governorate level institutional strengthening and capacity building in Nineveh and Basra (2015-17) aimed to establish more effective local authorities who can serve their people more effectively, which in turn prepares them to take on greater responsibilities as part of the decentralisation process.

GPG’s work took place in highly conflict sensitive and fluid political environments, including during the occupation and liberation of Mosul, capital of Nineveh province. Our effectiveness in enabling local stakeholders to begin to forge collective strategies to manage extreme financial, community cohesion and service delivery challenges was based on our in-depth experience in and knowledge of Iraq, both at the federal and the provincial level, alongside an adaptive approach to programming which enabled us to dynamically react to shifts in the volatile context, based on ongoing political analysis.

Activities and interventions were designed to be sensitive to the operating environment and the political and cultural context of Nineveh and Basra, including gender sensitivity in a conflict setting.

“It can be said, unequivocally, that GPG’s work in support of the institution has resulted in a more effective and functioning parliament … GPG’s work with the Council of Representatives has had a significant impact on the capacity of the institution and has seen some change in the policies of the Government of Iraq that will have a direct impact on
the citizens of Iraq. … GPG’s innovative delivery and cost effective model was such that project partners in Iraq felt GPG was in contact with them on a more regular basis and was more substantive in its discussions than implementers based in Iraq.” Independent evaluator of GPG’s project with the Council of Representatives, Iraq