Since 2018, GPG has supported the parliament of Ukraine (the Verkhovna Rada or VR) to implement internal procedural reforms and specific measures of its external Communications Strategy, including establishing and approving plans for a parliamentary education centre, starting a universities programme and holding school visits as a means of connecting with citizens and beginning to rebuild trust and confidence in the institution. GPG also assisted the VR Speaker and his office in strengthening internal communications between factions (parties), committees and parliamentary authorities, to better manage parliamentary business. 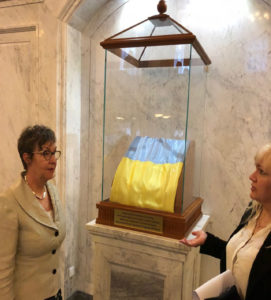 The Verkhovna Rada suffers from extremely poor levels of public trust and confidence. When GPG started its work in Ukraine, approval levels were at only 10% and lower than all other comparable public institutions.1 The 2019 election of a President with a media rather than political background is a visible manifestation of Ukrainian citizens’ disillusionment with their political system.

Within the parliament, Ukraine’s volatile and highly fragmented political environment means the task of managing legislation and engineering agreement around reform is complex. Significant parliamentary time is taken up with large quantities of legislation, which is subject to numerous amendments (many vexatious in nature and known as ‘legislative spam’). The plenary agenda changes at short notice and items of business which are scheduled frequently have not passed or even been discussed. Many Committees, though functional, act more as a processing system for legislation rather than adopting a scrutiny role or engaging meaningfully with citizens or civil society. As a whole, the VR lacks appropriate processes for systematically engaging with the public and taking up and considering issues of public concern.

GPG focused on the priority areas for the staff of the Speaker’s Office (and the Speaker himself), later extending this support to the Deputy Speakers and their staff. This process required rapidly building trust and mutual understanding with senior staff, through regular meetings and peer-to-peer support from GPG’s Associates, who have expertise in these specific areas. One of the main areas of support was focused on more effective internal communications between faction leaders and committees to improve the previous uncoordinated and often confrontational process for setting the plenary agenda, managing votes and ‘legislative spam’. GPG developed the strategic management capacities of the Speaker’s and Deputy Speakers’ Office staff by sharing case studies and producing operational plans based on UK and international experience and expertise, followed by coaching and mentoring to apply these principles to the context in the Rada. This included:

GPG also worked to support the Public Engagement and Communications Staff of the Parliament to identify clear priority actions and then to implement the first stages of a Rada Education Programme.

Initially, GPG brought the Speaker’s Office and parliamentary staff together to identify a clear priority target group, namely engaging with students to improve access to the VR and awareness of the role, function and value of their parliament. This is an area in which the UK has significant expertise, the long-term aim being to build trust in parliament as an institution. GPG Associate, Aileen Walker Former Director of Public Engagement in the House of Commons, who was directly responsible for significant development of the UK Parliament’s communications strategy over the last decade, provided direct support and mentoring to senior staff in the Rada to take forward this work.

GPG was able to see the tangible impact of this work, which was sustained after our intervention, in the form of pilot youth/educational visits to parliament which GPG helped develop through a collaboration between the VR and Go Global/Go Camps (a Ukrainian NGO which runs summer camps for teenagers). GPG also supported the development of a monitoring framework that helped the parliamentary staff to collect evidence of an increased understanding of parliament and an improved perception of its work amongst the students who engaged with the programme. Following this, key interlocuters in the Speaker’s Office with whom GPG worked have gone ahead with plans for establishing their Education Centre based on the business proposals GPG helped them to develop and finally, in July 2019, the Education Centre was inaugurated.

Over the last 10 years, the UK parliament has made great strides in improving public engagement with parliament under the banner of Connecting Parliament with the Public. In its initial phase, this programme focused particularly on education.

In the UK, it was the Speaker of the House of Commons who championed the need for investing in a dedicated Education Centre at Parliament. Even without a dedicated education centre, many activities can be offered to schools, and visits and tours to the parliament building to provide another route for engagement – the experience of the UK
Parliament is that visitors’ attitude towards parliament is more positive after a tour, and people leave more politically engaged. Beyond schools, links can also be established with universities, especially with politics and law courses, for example the UK Parliament’s universities programme. Such links can also be established with journalism courses, so that journalists are better informed about parliamentary practice and procedure.

More information can be found in GPG’s Guide to Parliaments: Parliments and Public Engagement

“GPG supported through a series of discussions and seminars in Ukraine and visits to London identification of priorities and analysis of the Communication Strategy of the Verkhovna Rada of Ukraine, providing advice on real initiatives for implementation … The result of the joint work of GPG and the Verkhovna Rada of Ukraine was the achievement of significant progress, it would be desirable to continue and develop this interaction, taking into account the potential impact on the formation of a positive image of the Ukrainian parliament and its accessibility to civil society, which may have a long-term impact.” Andriy Parubiy, Speaker of the Verkovna Rada

“The positive achievements of Global Partners Governance program have been of enormous value for professional training of the staff of the Verkhovna Rada of Ukraine. It is vitally important for Ukraine today to build its institutional capacities and, I believe, that the Parliament, as the most democratic institution by its nature should be ahead in this process. Therefore, learning the experience of the oldest democratic system in the world with regard to strategic planning, communications, branding, as well as the arrangement of the productive work of the staff, is so valuable.” Oksana Syroid, Deputy Speaker of the Verkovna Rada