Global Partners Governance celebrates its 15th anniversary! This is a very proud and special moment for us, and we thank all of our past and present members of staff as well as our exceptional Associates for all the extraordinary work we have achieved together.

For all of the second half of November, we will be looking back onto 15 years of strengthening representative politics with daily retrospective posts reflecting on GPG’s major collaborations, publications, and achievements. You can find these posts on our Twitter account, on Instagram, or on our website. We hope they will put into light how our values and commitments came to take shape.

15 years – and to many more! You, our Partners, our Associates, our colleagues, will be instrumental in determining the future of GPG. We look forward to so many more projects and publications and events, and even though we cannot celebrate this milestone with you just now, it is with great anticipation that we look forward to meeting with you again.

Don’t forget to read and share our latest blogs!

GPG’s Head of Programmes Zafran Iqbal provided us with an insightful overview of the multi-factorial drivers of youth discontent in Iraq, and highlighted areas of focus to address young people’s grievances.

Former FCO Minister and Minister for Women and Equality Meg Munn introduced the project she worked with GPG on the role of male allies in supporting women’s representation in politics.

On the occasion of her collaboration with GPG on the creation of an online course for the Uzbek parliament, GPG’s Associate and Former Deputy Chief of Staff to the Deputy Prime Minister Baroness Alison Suttie recalled her memories of working in Uzbekistan, and voices her hopes to soon resume in-person collaboration.

During the month of October, Prime Minister Mustafa Al Kadhimi went on a Europe tour to meet key leaders that included visits to France, Germany and the UK to discuss joint cooperation to boost Iraq’s economy, security and healthcare system. During Al Kadhimi’s visit to the UK, the Iraqi Economic Contact Group was launched to mobilise international support for an urgent economic reform programme that would create opportunities for Iraqi people to secure better future. The UK has also launched a three-year project worth £6 million to provide world-leading expertise to Iraq, as well as improve security and deliver the desired economic reforms. On the national level, the Iraqi Parliament voted on the final version of the electoral law which would pave the way for early elections in June 2021. Furthermore, the Parliament passed, with a majority vote, an emergency bill to cover salaries of public workers through enabling the government to have access to required funds to cover a widening financial deficit of around $28 billion.

GPG Iraq team resumed work with the Iraqi Council of Representatives’s Research Department and started working with the Training and Development Department. We had a very successful introductory session with the Research Department on Post-legislative Scrutiny (PLS). These PLS sessions aim to enable staff to select one specific law that would lay the foundation of a Pilot project for the staff to perform PLS on this law. We will also be working to support the Research Department’s plan beyond PLS. In addition, our team is planning to submit a proposal for our support to the Training and Development department. The Health and Environment Committee has finalised the parliamentary inquiry on the Sources of Water Pollution and its Impact on Public Health, and is in the process of presenting it to the Committee’s Chair.

When it comes to our Youth Political Participation online course, we have finalised the materials and we will be working on designing the platform to get it published soon.

GPG has returned to Khartoum, this time via  ‘virtual visit’ sessions. The ‘virtual visits’ follow a series of sessions between GPG Associates and National Committee to Counter Trafficking (NCCT) staff, where we discussed their current effort to review the 2014 Anti Trafficking legislation and their upcoming reporting requirements on human trafficking in the country.

Despite the team not being able to travel to Sudan, our Project Assistant Abdal-Rahman ElTayeb is currently there, facilitating the arrangement from the NCCT’s end. Associate Dr Mohamed Abdelsalam Babiker, based in Khartoum, is also attending the meetings to provide his expert opinion and to ensure the information is relayed accurately to the staff members. The outcome of the ‘virtual visit’ sessions will determine the support to be delivered over the coming period. From reporting on human trafficking to leading effective public awareness campaigns, GPG will work alongside the NCCT to support their goals towards the end of the year. 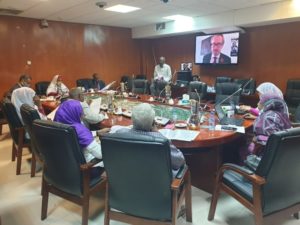 GPG is following closely the armed conflict that erupted in Ethiopia between the Federal Government and rebels from the Tigray region, which created a humanitarian crisis in Eastern Sudan, bordering Ethiopia. According to UN statistics, as many as 30,000 refugees have crossed the border into Sudan from Ethiopia, with the numbers expected to rise exponentially as the fighting continues. The eastern part of the country is already home to much of the trafficking rings that operate the Horn of Africa migratory route. This humanitarian issue will likely drive an increase in trafficking instances of vulnerable groups. GPG is closely monitoring the situation in the East and continues to work with the NCCT to deliver realistic responses that will help the government of Sudan in combatting the problem. 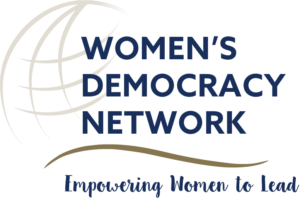 In early November, GPG submitted the Male Allies training course designed for the IRI Women’s Democracy Network project in collaboration with Associates Meg Munn, Alistair Burt, and Stephen Gethins. The team put together a five-module course on how male allies can support women’s leadership, which will be used by IRI’s teams in a variety of context internationally.

The course leads participants through understanding what a male ally is, why they matter, who could be a male ally, and when and how to seek male allies. The modules include an exploration of gender and masculinity and a recognition that both systemic and individual actions are needed.

Designed for both women and men, the course analyses the range of circumstances in which to involve male allies primarily across parliaments and political parties. It recognises that systemic and societal pressures constrain men as well as women, making it difficult for all to act differently.

The course contains many different types of materials, based on a range of case study interviews with young leaders from Colombia and Japan, as well as politics and gender experts from the UK and Kenya, to name a few.

You can read more about the importance of male allies in Meg Munn’s blog which was published last Friday.

Throughout the last two weeks,  with Atalanta and LOST’s support, GPG finalised the update of the Political Economy Analysis (PEA). It was initially carried out in the first iteration of this project under the British Embassy in 2019. The following year witnessed several moments of dramatic change in the country, including an economic crisis and the collapse of the banking system, as well as the protests of the October 17 revolution and the explosion in the Port of Beirut in August. The current update was implemented under the female political participation project funded by Porticus, and covers the ways in which this singular year has continued to affect women’s political participation. This summary highlights key areas from the PEA, with page references to the PEA document itself provided in brackets.

The PEA update provides an historical overview of Lebanon’s political structures and institutions, maps the key stakeholders for the programme, including the key supporters and opponents to advancing women’s leadership, details the barriers facing women candidates and elected officials, and explores the potential opportunities ahead.

Additionally, GPG is holding a series of meeting with the women’s wings of the Lebanese political parties in order re-open the communication channels with them after Fiftyfifty’s departure from the project. Moreover, GPG is in the process of enrolling the participants from the women’s wing of the Progressive Socialist Party into the ‘Gender Policy and Your Party’ online course activity, funded by the British embassy.

GPGF is supporting the Oliy Majlis and will be launching the latest online course for the Human Rights Committee, which is designed to support the Committee’s MPs and staff in fulfilling their role. Meanwhile, together with our Associates, we are actively working on content development. The course aims to introduce international human rights systems, best international practice, and a variety of sources to the Committee’s members. It also explores how this knowledge can be adapted to the Uzbek context through discussions and analysis exercises. The key task for the GPGF team is therefore to ensure that we are flexible in the design of the module so as to amend the learning materials dependeing on the requests and priorities of the participants.

Additionally, efforts to enhance human rights in the country have been recognised – Uzbekistan was elected as a member of the UN Human Rights Council. The country’s commitment to fundamental principles and international cooperation in the field of human rights should be an indicator of the high engagement of the future Committee members and of other human rights actors of Oliy Majlis to learn and to engage in conversations with our Associates.

After an initial delay due to a reallocation of government priorities caused by COVID-19, GPG has finally been awarded an extension for our work with the FCDO in Kuwait, focusing on the Development of a new Parliamentary Code of Ethics.

Similarly, our FCDO funded project in Bahrain, working with the Bahrain National Assembly, has also been extended.

Additionally, GPG won the Modern Slavery Policy and Evidence Centre fund on COVID-19 Rapid Response from the Arts and Humanities Research Council (AHRC).  This is a small research project, in consortium with Rights Lab (University of Nottingham), RUSI, Waging Peace, and GPG. The project will provide critical insight into the impacts if the COVID-19 pandemic on modern slavery risks, experiences, and responses in Sudan.

Futhermore, GPG won the UNDP bid on Innovative Techniques and Strategies for the National Assembly of Armenia, Modern Parliament for Modern Armenia Project. The project will provide parliamentary support on standards, ethics, office management and procedure, policies, and constituency work in beyond the scope of the ToRs.

The awarding of the two FCDO and UNDP contracts in particular is a great success in light of the current situation. It points to our sound reputation and the confidence funders have in continuing to support our work even in uncertain times.

We are delighted to welcome Rhiannon Hollis as our new Deputy Director. Rhiannon previously worked in the House of Commons where she gathered extensive senior experience. She will be sharing her insight with us across GPG and GPGF, especially on Operations and a variety of projects.

GPG is still working remotely, and will continue to do so for the foreseeable future.  Systems have been put in place to ensure this will be as seamless as possible.