Former Clerk in the House of Commons

Andrew has a wealth of experience speaking to overseas, business and academic audiences about running a legislature. Drawing on 39 years working as a Clerk in the House of Commons, he has frequently been consulted and given advice on all aspects of parliamentary procedure. For the last five years he has been leading the UK Parliament’s Committee Office – some 200 staff supporting MPs on 30 or more select committees – as well as contributing to the management of the House of Commons through challenging times.

Both through bilateral contacts and with organisations such as the Inter-parliamentary Union (IPU) and the Commonwealth Parliamentary Association, he has shared best practice and lessons learned with colleagues in other Parliaments. For six years he was Joint Secretary of the Association of Secretaries General of Parliaments (ASGP) – the worldwide club of top parliamentary officials which works within the auspices of the IPU.

Andrew has published on a variety of parliamentary subjects and taken a particular interest in justice & home affairs and defence issues. He was the editor (with Professor Robert Blackburn) of Parliament: Functions, Practice and Procedures (second edition of Griffith & Ryle, Thomson Sweet & Maxwell 2002).

He is used to working in French and has conversational Italian. 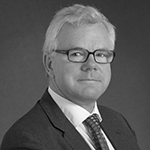 Andrew Kennon
Former Clerk in the House of Commons