Ausamah Alabsi is a Bahraini national, an economist and a practicing expert in the field of Migration Management, Labour Reform, and Combatting Trafficking in Persons & Modern Slavery in the Middle East. He was the Chief Executive Officer of Bahrain’s Labour Market Regulatory Authority (2011-2020), and Chairman of the National Committee to Combat Trafficking in Persons (2015-2020).

He was responsible for the reforming of the Bahrain Labour Market, and devised the first ever sponsor-less work visa in the middle east. Under his chairmanship of the National Committee to Combat Trafficking in Persons, Bahrain went from being in the Watch List of the US Department of State’s Trafficking in Persons annual report to being the first ever Arab country to achieve Tier 1 status in 2018. Ausamah was personally awarded the Trafficking in Persons Hero Award by the US Department of State in the same report for his achievements. Bahrain continues to be the only country in the region to hold this rank.

Ausamah is accredited with the launch of the first Arab National Referral Mechanism (NRM) for Cases of Trafficking in Persons in Bahrain; and the first fully Digitized NRM in the world.

Previously he held the positions of Deputy Chief Executive of the Economic Development Board (2005-2011), and Director of Employment at the Ministry of Labour & Social Development (2002-2005). 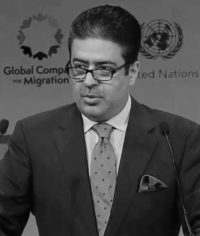