Joyce has long-standing leadership development and coaching skills. She has worked nationally and locally with health bodies and local authorities on development of Health and Wellbeing Boards; on system leadership skills to drive integration of Health and Social Care including in Wakefield, Worcestershire and Central Bedfordshire; and with Public Health England and in the North West on transition of Public Health.

Joyce has 17 years’ experience as a Chief Executive, successfully leading three authorities: Wigan, Gloucestershire County Council and Monmouthshire. Joyce has been a keen practitioner of place-based leadership, in order to improve outcomes for citizens. She has contributed at a national, regional and sub-regional level. She built strong working relationships in her dual role as PCT as well as Local Authority Chief Executive in Wigan, bringing about significant improvements and has contributed to better integration at the Greater Manchester level. She has helped redesign and reshape services, taking a poor service performance in Gloucestershire County Council to a good authority rating, including significant improvements in its education services. 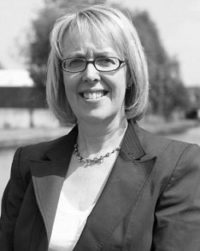