Expert in Political Economy of the Middle East

Karen Young is a resident scholar at the American Enterprise Institute (AEI), where she focuses on the political economy of the Middle East, the Cooperation Council for the Arab States of the Gulf (best known as the GCC), and the Arabian Peninsula. She concurrently teaches courses on the international relations and economy of the Middle East at George Washington University and at the Johns Hopkins School of Advanced International Studies.

Before joining AEI, she served as senior resident scholar at the Arab Gulf States Institute, a research and visiting fellow at the Middle East Centre of the London School of Economics and Political Science, and an assistant professor of political science at the American University of Sharjah in the UAE.

In addition to being published in a variety of policy journals, Dr. Young’s work has appeared and been mentioned in the popular press, including Bloomberg News, the Financial Times, The New York Times, The Wall Street Journal, and The Washington Post. She has been interviewed by CBS News, NPR, Al Jazeera, CBC, and CNBC Arabia, among other networks. Dr. Young has also contributed chapters to edited volumes, and has authored “The Political Economy of Energy, Finance and Security in the United Arab Emirates: Between the Majilis and the Market” (Palgrave Macmillan, 2014).

Dr. Young obtained a Ph.D. in political science from the Graduate Center of the City University of New York. She has twice been awarded a Fulbright fellowship: once to Ecuador, where she received an M.A. in international economic relations from the Universidad Andina Simón Bolívar in Quito, and later to Bulgaria. Earlier she obtained an M.A. in political science from Columbia University and a B.A. in anthropology from Wellesley College. 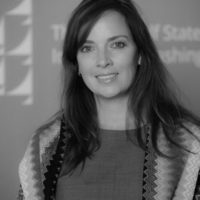 Karen Young
Expert in Political Economy of the Middle East