Nayla is MENA Projects Manager, currently managing two GPG projects in the Gulf. She is responsible for engaging Parliaments in Bahrain and Kuwait to provide support across different policy areas including questions of integrity and conduct in the public sector, legislative follow-up and impact, and inter-institutional relations.

Previously, she was Regional MENA Coordinator at the London-based Institute for Strategic Dialogue’s, working on their Strong Cities Network and Young Cities programmes in Lebanon and Jordan, focusing on local government capacity building in the field of P/CVE. Prior to joining ISD, Nayla worked as a Research Assistant at McGill University in Montreal, on issues of transitional justice, female militancy and violent conflict in Lebanon. She also worked on female radicalisation in the MENA region and Syrian refugee prospects for return at the Carnegie Middle-East Center in Beirut. 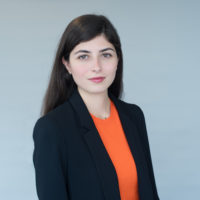